As you know we love sharing your cosplays, we also love sharing stories and finding out a bit more about the cosplayers that send us their pictures.

Normally in the Cosplay Spotlight we share from a selection of cosplayers the reason why they chose their characters and a bit about why they cosplay.

We’ve posted a couple of Olesya’s pictures of  here as Clara recently and they went down a storm, which might have a little something to do with Olesya being the spitting image of Jenna Coleman 🙂

So we got in touch and asked her if she’d write a short piece for us about how she got into cosplaying. We’ve already rambled on for far too long so without further ado we’ll pass you over to Olesya:

“Growing up, I had a lot of insecurities about my appearance. Sure, most days I could cope with the lingering disappointment of being anything other than a tall size zero blue-eyed blonde, which seemed to be the ideal perpetrated in every single movie I watched. But then, one day, a friend recommended Doctor Who…

Matt Smith was my first doctor, and with his guidance I learned about the importance of kindness, adventures, and friendship. I knew I was hooked the minute the theme song started playing, and even today that familiar ‘doo-wee-oo’ makes me smile. And then – amazingly – his new companion was a girl who looked just like me, and yet it was easy to see that Miss Coleman was proud of who she was!

Clara became an instant favorite not only because of her sassy charm and intelligence, but because for once, the person looking out from the TV screen had a face not unlike my own. It was love – and obsession – at first sight! 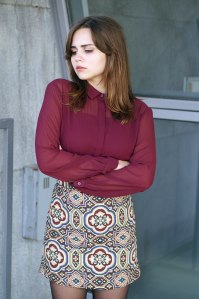 I started cosplaying Clara a few months ago, after many prompts from friends of mine, and I don’t think I’ll ever stop. When I’m wearing her clothes, I feel almost invincible, the impossible girl who can save the world just like that. What’s more, Clara’s style is young, fresh, and unique – when I’m cosplaying her, I’m the kind of girl I’ve always wanted to be. It’s not really about trying to look like Clara anymore – it’s about channeling her fiery spirit and not letting anyone get me down.

I’m looking forward to series eight with an intense kind of impatience, but I know that my joy will be bittersweet given the recent announcement about Jenna Coleman leaving the show. I can’t believe the girl who helped me regain my confidence will no longer be there to support me from my TV screen every week… It’s a long shot, I know, but what about it, BBC: why don’t you pick me to play Clara? After all, Jenna may be leaving but Clara doesn’t have to…”

Olesya has also done a Clara makeup tutorial which is well worth a watch.

She’s also recently set up a Clara themed tumblr blog, so if you’re looking for information on cosplaying Clara check it out! If you’d like to see more of Olesya’s pictures they can be found here and don’t forget to give her cosplay page a visit: Belle Dormante Cosplay.

We hope you’ve enjoyed this article, we’re keen to make the Cosplay Spotlight a more regular feature here at Doctor-Who-Cosplay.com, if you’ like to take part simply email us a paragraph(s) to DWCosplayers@gmail.com about what you cosplay and why you pick that character. If you’re looking for inspiration on what to write have a look at our previous articles 🙂

Follow Doctor Who Cosplay on WordPress.com
Join 32,803 other subscribers